No, they moved to Portland.

And the mayor Ted Wheeler is not accepting help from Trump. 90 days of riots in his town, and he is blaming Trump.

Nice to know BLM is all about peace and love.


Kenosha activist declares open season on white people: 'It’s time for us to kill one of yours'

At a rally in Kenosha on Saturday, an activist declared that black people should retaliate against white people when they kill members of the black community.

Kenosha has been reeling from racial unrest over the last week after police shot Jacob Blake seven times last Sunday. Following the shooting, violence erupted in the southern Wisconsin city, resulting in widespread destruction, riots, and even two deaths.

What did the activist say?
According to the Kenosha News, the shocking comments were made during a rally on Saturday during which demonstrators demanded justice for Blake.

The man, who was only identified by one demonstrator as "our president," according to the newspaper, made his comments during what the Kenosha News called a "peaceful march."

But the activist's instructions were anything but peaceful.

"I love being black. I love black people. I know some of you may not want to say that," the man said, according to the Kenosha News. "You tell us how to behave when you have taken our lives. The black man is worth something. His life is worth something."

"I have to say god d**n it — if you kill one of us, it's time for us to kill one of yours," the activist went on to say. "I know everybody don't want to hear that. But d**n why are we the ones who have to keep burying ours and got to keep clean for you to see us as being human? We ain't never did nothing to nobody."


Anything else?
As TheBlaze reported, the Kenosha Professional Police Association released a statement Friday contradicting key details of the Jacob Blake incident as reported by the media.

"The purely fictional depiction of events coming from those without direct knowledge of what actually occurred is incredibly harmful, and provides no benefit to anyone whatsoever, other than to perpetuate a misleading narrative," the police union said.

The police union claimed that Blake was "armed with a knife," refused to cooperate with officers, and even "forcefully fought with the officers, including putting one of the officers in a headlock."

"Based on the inability to gain compliance and control after using verbal, physical and less lethal means, the officers drew their firearms," the union explained. "Mr. Blake continued to ignore the officers' commands, even with the threat of lethal force now present."

Jacob Blake was a muslim. The father of Jacob Blake who was shot by the police, recites verse from Quran for his son.

“He’s a human being, and he matters!”

Hop onto the next grievance Train!
Islam: an idea to kill and die for.
Top

Hop onto the next grievance Train!

Apparently, that's already been happening in India in the context of the Indian government allowing illegal immigration by persecuted non-Muslim minorities fleeing the land of the pure created by Muslims who did not want to live in a United, hindu-majority India. Doubtless india has its own witless progressives eager to take up the slogan and riot alongside the victim group par excellence.
"Prophet Muhammad...bought, sold, captured, and owned slaves" SOURCE: BBC website
"Muhammad is considered to be a perfect model" SOURCE: BBC website
Top

Taking about grievances and entitlement, here is a woman in a bubble tea shop complaining it is not "black owned" and how the Chinese owner "stole" the bubble tea from "the blacks", claiming "cultural appropriation". (In reality this wonderful drink was invented in Taiwan and is very popular all over SE Asia) ... or those who do not know it, it is basically tea (Chinese tea, generally) sometimes with milk or soya milk, sugar and tapioca pearls, and various flavourings. It is served cold, with a big diameter straw. You can also get it ready made is Chinese or Vietnamese supermarkets.

The hilarious part is that she is doing all that shouting in ENGLISH, that well known native-African language.... presumably also stolen from the "blacks" by Americans and people in the UK.... she could not have possibly "culturally appropriated" that now, could she?

BTW does anyone think all these weird goings on in the US a few weeks before an election are coincidental?
Jesus: "Ask and you will receive." Mohammed: "Take and give me 20%"
Top

President Trump visits the sites of what was left of the “mostly peaceful” protests in Kenosha. 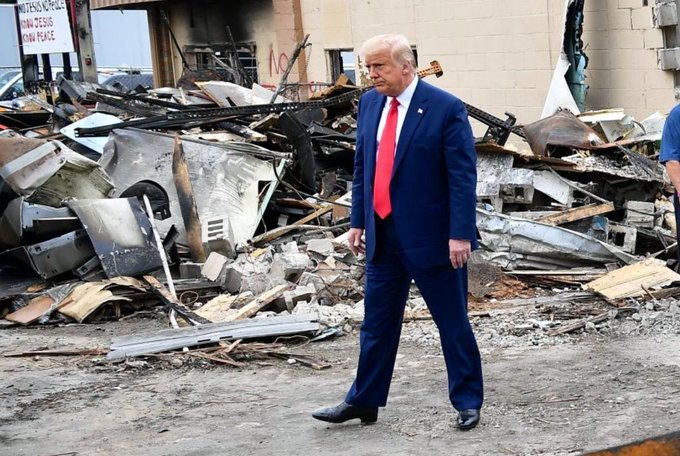 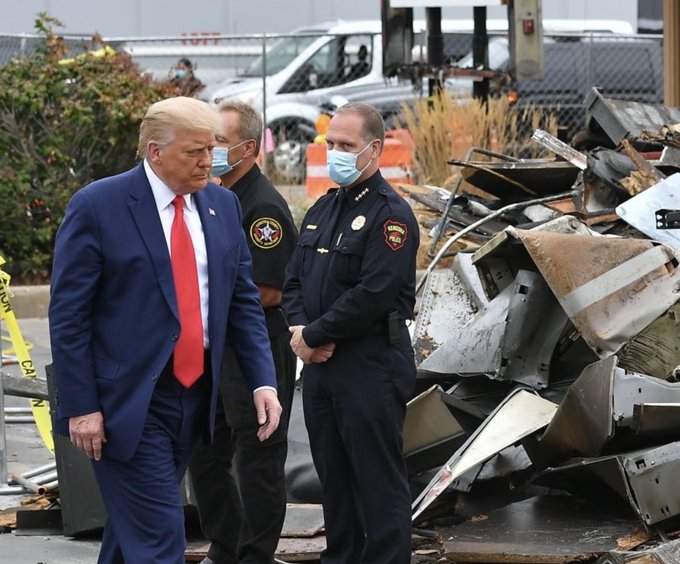 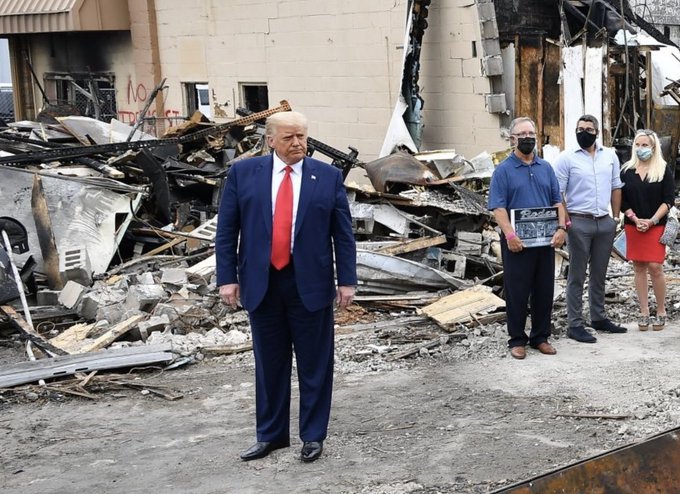 Islam: an idea to kill and die for.
Top

A quick Google image reveals a number of halal Italian. Well, before the Italians were pagans and then christians, they were Muslims.. So this is just taking Italian cuisine back to its roots before they started adulterating it with ham and improperly killed meat.
"Prophet Muhammad...bought, sold, captured, and owned slaves" SOURCE: BBC website
"Muhammad is considered to be a perfect model" SOURCE: BBC website
Top

If you do more research, you will find out that all the halal Italian restaurants are opened and owned by Muslims. And not only in Italy, but all over Europe.

Perhaps Muslims should keep their halal fingers off from Italian pizza restaurants.

Even in the little village I live in, is an Italian restaurant who is being owned by a Turk. However. The place is empty all the time, and I guess the restaurant is being used for money laundering.
The heart of the wise inclines to the right,
but the heart of the fool to the left.
Top

And now back on topic antineoETC .

If you want to write more about Italian pizza tents, open a new topic.
The heart of the wise inclines to the right,
but the heart of the fool to the left.
Top

If you want to write more about Italian pizza tents, open a new topic.

No, they moved to Portland.

And the mayor Ted Wheeler is not accepting help from Trump. 90 days of riots in his town, and he is blaming Trump.

This letter is FAKE!!!!. That's right it is FAKE/ Why you ask?. Because it is too mild & timit. The language is way too polite to what trump deserves.
Top

CORRECTS TO SAY THAT JOHN RODE IS NOT THE CURRENT OWNER OF RODE’S CAMERA SHOP; HE IS THE FORMER OWNER - President Donald Trump talks with John Rode, the former owner of Rode’s Camera Shop, as he speaks with business owners Tuesday, Sept. 1, 2020, during a tour of an area damaged during demonstrations after a police officer shot Jacob Blake in Kenosha, Wis. (AP Photo/Evan Vucci)

KENOSHA, Wis. (AP) — The owner of a camera shop that was destroyed during unrest in Kenosha and highlighted during President Donald Trump’s visit says the president used his store for political gain by appearing with a former owner of the business while touring the epicenter of the latest eruption over racial injustice.

Tom Gram said he bought Rode’s Camera Shop from the Rode family eight years ago, though John Rode still owns the property. Gram’s four decades of work at the store came to an end Aug. 24, when the building was destroyed by fire during protests over the police shooting of Jacob Blake.
Top

John Rode does not own Rode’s Camera Shop. However, he does own the property, located at 2204 Roosevelt Road in Kenosha, the site of Rode's Camera Shop. So he had every right to be there.

And good luck to Tom Gram who does not like Trump. I hope he is assured.

And Hombre...There were also people who were glad that Trump visited the town. Have a look.

You should accept dat there always have been lovers and haters for presidents. And your disgust for Trump does not mean that other people have follow your aversion of Trump.

For you, I hope that Biden wins this election, but for most people in the US, I hope that Trump wins, because I think he is needed to bring welfare and peace to America and the rest of the world.
The heart of the wise inclines to the right,
but the heart of the fool to the left.
Top

I am sorry antineoETC. But why don't you answer this question from Manfred? Then I had understood.


Taking about grievances and entitlement.
[-]
BTW does anyone think all these weird goings on in the US a few weeks before an election are coincidental?

My answer to Manfred...No, I do think all those things are coincidental. The riots in the US are part of a plan to discredit Trump so that he shall lose the elections.

The rioters includes anarchists, Antifa (anti-fascist) activists and agents provocateurs and they are being payed by Soros and his croonies.
The heart of the wise inclines to the right,
but the heart of the fool to the left.
Top

Come on Hombre.. You know that is not true. Why are you so aggressive

Today, I sent this letter via email to @realDonaldTrump declining his recurring offer to aid Portland by sending federal enforcement to the city.
The heart of the wise inclines to the right,
but the heart of the fool to the left.
Top