For topics which do not fit into any of the other categories.
Post Reply
11 posts • Page 1 of 1

Police in Louisville have closed streets and set up barriers ahead of protests expected in the city today.

I have not followed it, but it does not look good.

“Black pants, black button-down shirt, black masks, shotgun, semi-automatic or rifle. Pistols, hide holsters are under your arm. If you’re not in that uniform, won’t be in the formation. Period,” said NFAC leader Grandmaster Jay during a video post announcing the date the formation will happen in Louisville. 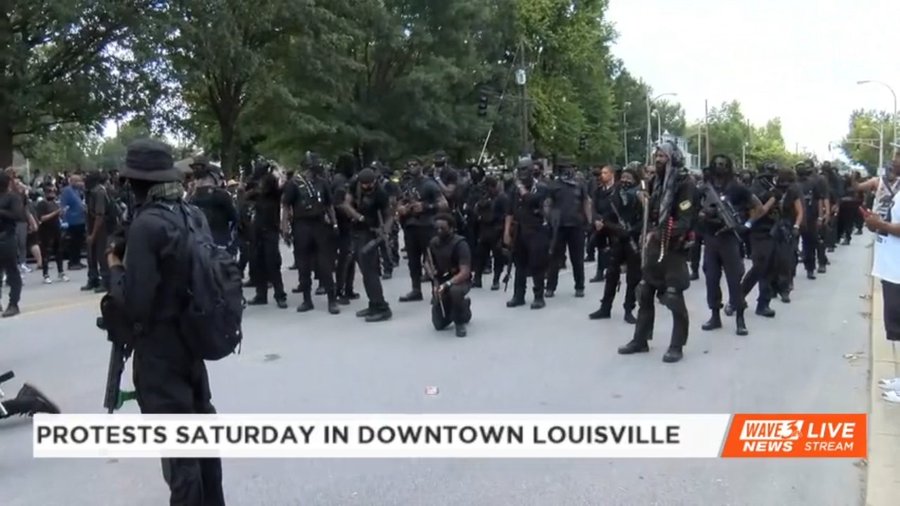 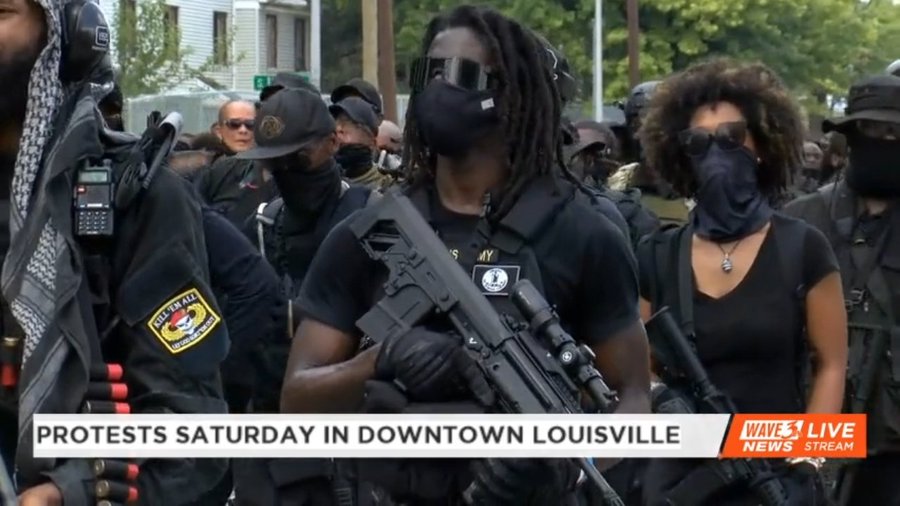 The group is asking for justice in Breonna Taylor’s case.

The NFAC leader, known as Grand Master Jay, spoke to a crowd in downtown Louisville Friday night, saying, their goal is to back up protesters with muscle.

“They raise awareness, which they have, but they’ve raised awareness enough and they’re still not getting results. Now, you’ve got to go into the tool box and take out something a lot stronger,” said Grand Master Jay.

A second militia group says they will hold a counter-protest.

LOUISVILLE, Ky. (WAVE) - The Not F***** Around Coalition is making its way to Louisville on Saturday.

Its leader said it’s a militia exercising its constitutional right to assemble and bear arms. It expects 5,000 of its members to participate.

Grand Master Jay, also known as John Fitzgerald Johnson, is the leader of the group and said the NFAC’s only concern is the movement for justice in the Breonna Taylor case. Taylor was shot dead by LMPD officers serving a warrant at her home back in March.

Jay said its members are coming to Louisville in peace and have no intention of creating or adding more chaos to what the city already has seen. He said the NFAC is an organized group, not a mob. He said at times the group feels its appearance is necessary to spread a particular message. In this instance, it’s showing its concern about justice for Taylor and other victims of officer brutality, as well as police reform.

”The NAFC has been misrepresented by many on social media and so forth, and we’re here to end those theories,” Jay said. “We’re not here to cause chaos. There have been rumors we’re coming to hunt people down. Again we are simply exercising our constitutional rights to assemble and bear arms.”

Jay said he’s not concerned with counter-protesters, and added that Saturday’s event is neither a protest nor a demonstration. He said its schedule has been coordinated with LMPD to make sure it is a safe and peaceful display in Louisville. The event’s location has been determined, but the group said it won’t make it public until later this week to prevent counter-protesters from causing problems.

In addition to its conversations with LMPD, the group said it has talked with the attorney general, the mayor’s office, and local activists. It said conversations on all levels were positive, and the group received nothing but support for its assembly. Jay said the NFAC will start its display around noon Saturday. 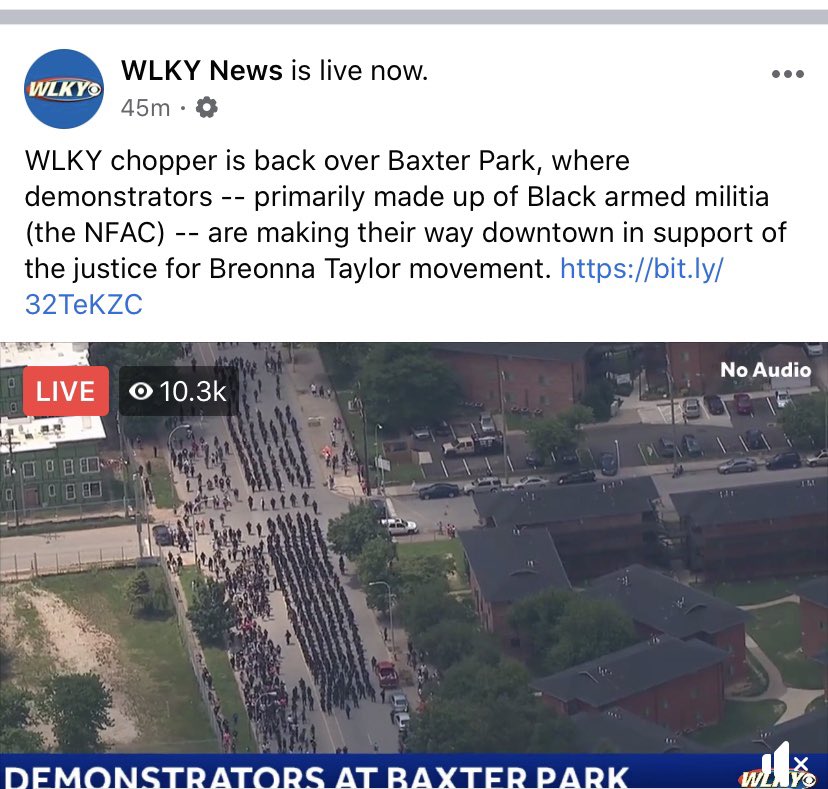 Gunshots erupted during a planned protest in Louisville, Ky., Saturday and three members of the heavily armed militia group, the “Not F---ing Around Coalition” (NFAC), were injured by shots fired from one of their own member's guns, police told Fox News.

The shooting took place near Baxter Square Park around 1 p.m. and all of the victims were transported to the University of Louisville Hospital with non-life-threatening injuries, the Louisville Metro Police Department (LMPD) told Fox News.

Protesters ducked behind cars and scattered to flee the area, a reporter from WHAS11 wrote on Twitter.

One of the members of the NFAC spoke to throngs of protesters and said “we had a little accident, it happens,” the reporter said

In November, no matter which side is elected there will be a revolution.
If Trump wins, the left goes insane.

If the Dems win, there will be retribution, and long term bad life for Americans.
The communist will run the show.

Biden is only a place holder. He won’t be running the country.
Islam: an idea to kill and die for.
Top

At these times one should think about what Muhammad would have done in these circumstances. I think that if it was happening in his domain then his response would have been brutal and no opposition left to cause any further bother. One has to admit that he knew how to keep control.

The protest are not only in Louisville, but all over America are hotspots.

In Louisville two opposing, heavily armed militia groups came within a few dozen yards of each of other, but avoided violence. In Seattle, the city's police declared a riot, citing "ongoing damage and public safety risks." In Austin, authorities say one person was shot to death at a downtown protest. And in Chicago, pro-police and anti-police groups yelled at each other, but parted peacefully following a “Back the Blue” protest.

The ongoing protests come as federal agents deploy to major cities in a "surge" President Donald Trump says is aimed at curbing gun violence. That involvement is sparking backlash from both protesters and local officials.

In some areas of the country, marches were held in support of police. Among them: In San Angelo, Texas, hundreds of people showed up Saturday to participate in the Back the Blue walk in a show of support for law enforcement officers.

A teaching moment for Americans for what they can expect come November.

Trump can't win on this. If he sends in the troops he is a tyrant. If he lets it continue he is weak and undecisive.
The left is pushing the envelope to see how far they can go.
They have two generations of brainwashed activist egged on by the deep state.

Difficult situation. A battle of wills. But something have to be done to stop the madness.
As long as this does'nt spread to Europe. We have enough troubles already. (uncontrolled migration)

This is not a protest. This is systemic rioting to overthrow the system.
Islam: an idea to kill and die for.
Top

I think you are right PR. Very worrying

Why are they called protesters when they are armed and look like a paramilitary outfit?
Who is financing these "protesters"?
Islam: an idea to kill and die for.
Top

Why are they called protesters when they are armed and look like a paramilitary outfit?
Who is financing these "protesters"?

By the same token Hitler's brownshirts (Sturmabteilung) were also protesters.
Islam: an idea to kill and die for.
Top
Post Reply
11 posts • Page 1 of 1